“Enhanced consumer awareness and legislation are pushing OEMs and processors to improve sustainability, hence a growing demand for solutions with lower environmental footprint,” claims Peter Browning, General Manager of Solvay’s Engineering Plastics Business Unit. “However, the variable performance of recycled materials prevented our customers from using them in the most demanding applications. With Technyl® 4earth®, allying eco-design and high performance is now a reality!”

Such pioneering innovation is born from the Move 4earth® project supported by the European Commission (LIFE+ program) and recently awarded the Pierre Potier Prize for sustainable and eco-responsible developments. Industrialized in Poland, this patented process transforms stable sources of post-industrial or end-of-life technical textiles, such as automotive airbags, into prime quality engineering plastics. This unique technology offers novel eco-friendly products with similar performance when compared to our traditional Technyl®.

Officially launched at K2016 in Düsseldorf, Solvay is already developing a number of applications using Technyl® 4earth® with major players in automotive and consumer goods markets. 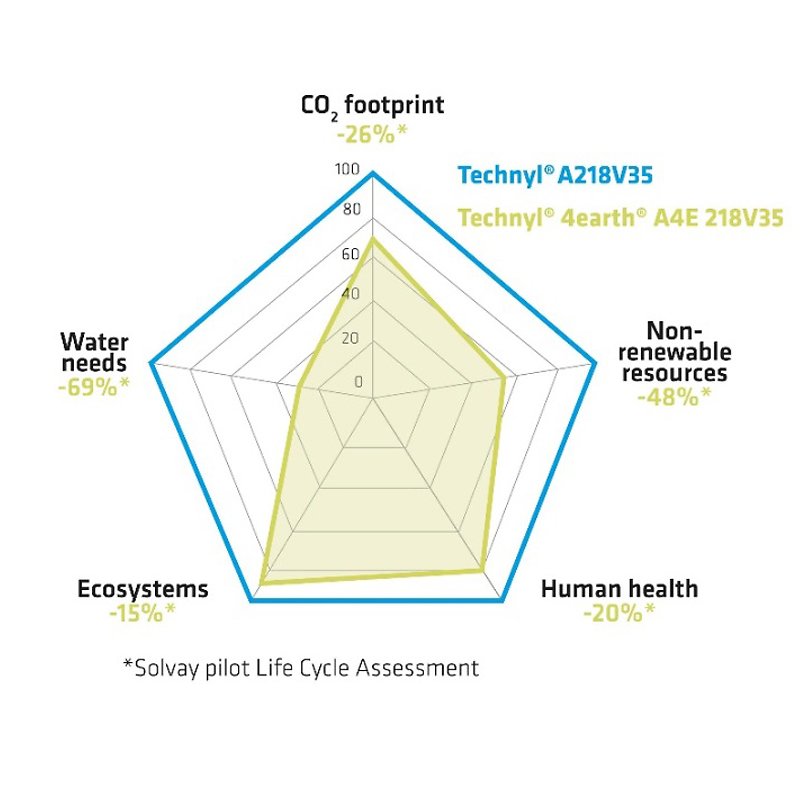 Solvay Engineering Plastics Business Unit is the global specialist in polyamide-based engineering plastics, with more than 60 years of experience in the development, manufacture and marketing of a complete range of high-performance materials under the Technyl® brand for demanding applications in automotive, consumer goods and electrical markets. With a growth strategy bolstered by six production sites worldwide, the Business Unit employs its expertise and innovation capabilities in order to serve the needs of its customers more closely through a global network of technical and R&D centers.

An international chemical and advanced materials company, Solvay assists its customers in innovating, developing and delivering high-value, sustainable products and solutions which consume less energy and reduce CO2 emissions, optimize the use of resources and improve the quality of life. Solvay serves diversified global end markets, including automotive and aerospace, consumer goods and healthcare, energy and environment, electricity and electronics, building and construction as well as industrial applications. Solvay is headquartered in Brussels with about 30,900 employees spread across 53 countries. It generated pro forma net sales of €12.4 billion in 2015, with 90% made from activities where it ranks among the world’s top 3 players. Solvay SA (SOLB.BE) is listed on Euronext in Brussels and Paris (Bloomberg: SOLB:BB – Reuters: SOLB.BR).