Solvay has been awarded the 2016 Pierre Potier Prize for Move4earth™

This revolutionary technology enables Solvay to transform technical textile waste, such as the silicone coated fabric used in airbags, into high quality recycled plastics. The continuous process combines fine shredding and chemical activation phase, associated with a separation technique based on density.

This project was piloted by the Solvay ‘Engineering Plastics’ activity and developed entirely in France, by the Group’s Research & Innovation and Engineering teams. Supported by the European Commission’s ‘Life+’

This project was piloted by the ‘Engineering Plastics’ activity at Solvay, whose world headquarters is located in Lyon, France. The project was developed entirely in France by the Group’s Research & Innovation and Engineering teams. Supported by the European Commission’s ‘Life+’ program, the Move4earth™ technology is currently in the industrialization phase at the Polish site in Gorzow.

“Solvay is proud to have been granted this prize that rewards the best sustainable development projects”, says Vincent Kamel, President of the Performance Polyamides GBU. “Move4earth™ is an emblematic initiative of the Group, forming an ecosystem that generates value for all the stakeholders”.

The recycled plastics obtained from the Move4earth™ process are a good substitute to high performance technical plastics used in automotive, construction, household appliance and leisure industries. It also provides significant environmental advantages: for example, the Life Cycle Assessment2 carried out by Solvay’s experts notably revealed that there was a 26% reduction in carbon footprint, 48% savings in non-renewable resources and a 69% decrease in water consumption compared to the standard process.

Every year in Europe, more than 9 million tons of plastic waste are dumped. “Regarding the airbag industry, around 25,000 tons of technical textile waste is generated every year around the world, and approximately 100,000 tons of end-of-life airbags”, explains Peter Browning, the General Manager of the Engineering Plastics activity. “Move4earth™opens the way for new recycling streams, by reusing textile waste for which there is currently no high performance recycling solution.”

Solvay was already the Pierre Potier Prize-winner in March 2015 for an innovation named BiFor-Safe®. This is a range of products based on sodium bicarbonate and mineral salts that enables to efficiently fight certain parasites and improve hygiene in agricultural buildings.

1 The Pierre Potier Prize was created in 2006 by the French State Department for the Economy, Industry and Digital Sector, in partnership with the French Federation for Chemistry Sciences (FFC) and the Union for Chemical Industries (UIC). The aim of the prize is to highlight initiatives in chemical industries that encourage both sustainable development and the development of eco-responsible approaches within the sector.

2 Comparative LCA study (Move4earth™ pilot process versus the standard Solvay process) regarding the manufacture of Technyl® Polyamide6.6 with 35% fiberglass. 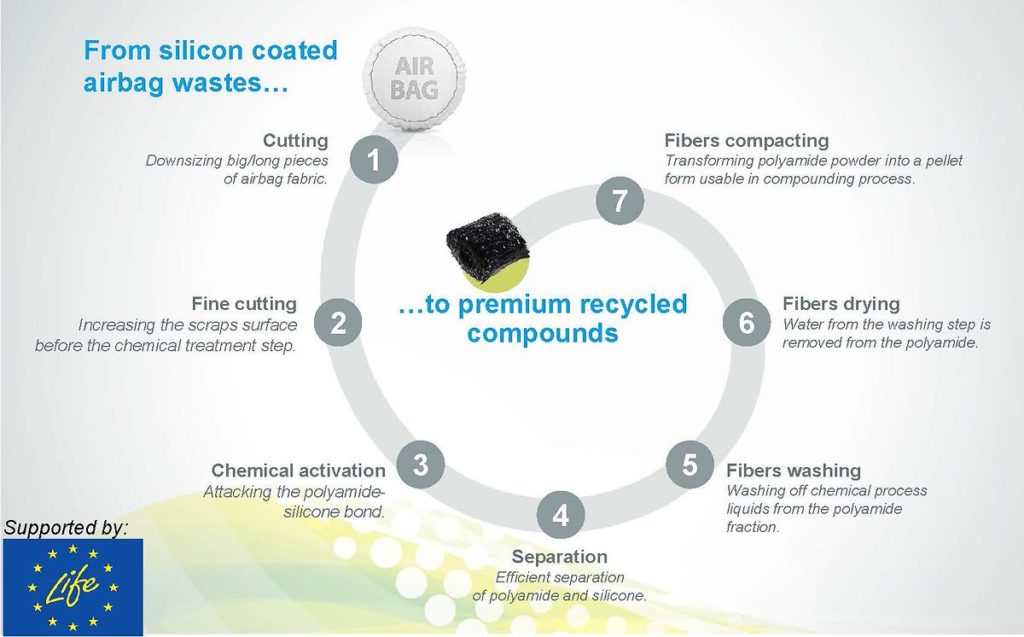 An international chemical and advanced materials company, Solvay assists its customers in innovating, developing and delivering high-value, sustainable products and solutions which consume less energy and reduce CO2 emissions, optimize the use of resources and improve the quality of life. Solvay serves diversified global end markets, including automotive and aerospace, consumer goods and healthcare, energy and environment, electricity and electronics, building and construction as well as industrial applications. Solvay is headquartered in Brussels with about 30,900 employees spread across 53 countries. It generated pro forma net sales of € 12.4 bn in 2015, with 90% made from activities where it ranks among the world’s top 3 players. Solvay SA (SOLB.BE) is listed on Euronext in Brussels and Paris (Bloomberg: SOLB:BB – Reuters: SOLB.BR).

Solvay has been awarded the 2016 Pierre Potier Prize for Move4earth™